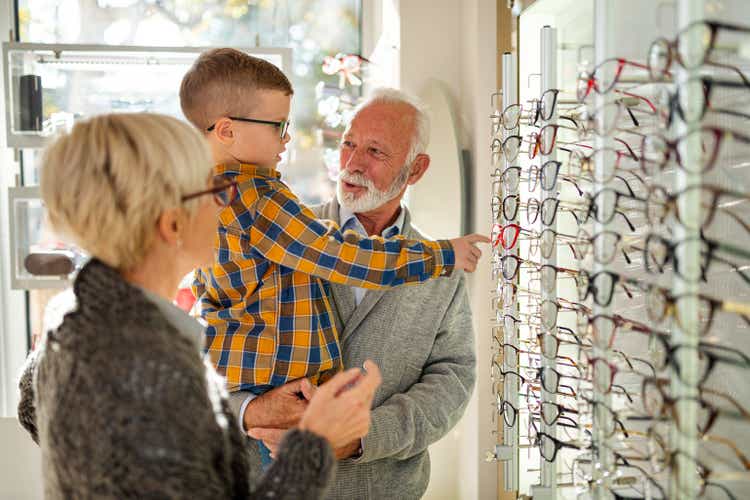 Today we take an in-depth look at a fairly well-known retail name. Although the company recently debuted on the market, the shares are already significantly in ‘Busted IPO’ territory, which has brought in some significant buying from a beneficial owner of the company. A full analysis follows below.

Warby Parker Inc. (WRBY) is a New York City based online retailer of prescription eyewear, sunglasses, and contact lenses through its website, www.warbyparker.com. The direct-to-consumer channel is supported by ~154 brick-and-mortar locations throughout the U.S. and Canada. Warby Parker was founded in 2010 by four Wharton Business School classmates, opening its first retail location in 2013. It went public through a direct listing on the NYSE on September 29, 2021, with a reference price of $40 per share and an opening trade of $54.05. After briefly eclipsing $60 concurrent to announcing its 3Q21 results on November 12, 2021, the stock price has pulled back significantly, now trading around $27.00 a share, translating into a market cap of approximately $3.2 billion.

With approximately 197 million Americans suffering some form of vision impairment, The Vision Council estimates the U.S. market at ~$42 billion, comprised of prescription and non-prescription eyewear (~$31 billion), eye exams (~$6 billion), and contact lens (~$5 billion). Grand View Research expects that opportunity to grow at an 8.5% CAGR through 2028. Warby Parker primarily competes with French eyewear giant EssilorLuxottica’s (OTCPK:ESLOY), which owns retail stores LensCrafters, Sunglass Hut, Pearle Vision, Vision Source, and Target (TGT) Optical. Furthermore, although not at the same price point, as a self-promoted fashion brand that has been featured in GQ and other style periodicals, Warby Parker competes against offerings from Prada (OTCPK:PRDSY) Eyewear and Dolce & Gabbana (amongst others), many of which are private-label brands manufactured by EssilorLuxottica. It also competes with National Vision Holdings (EYE), which operates over 800 America’s Best stores and more than 200 Vision Centers (located in Walmart (WMT) properties), amongst others. From a contact lens standpoint, it competes with Cooper Companies’ (COO) CooperVision, Bausch & Lomb (BHC), and Johnson & Johnson’s (JNJ) Acuvue. Smaller online retailers Glassic and eyebobs are mimicking Warby Parker by entering the physical store business. Furthermore, private practices also contest for customers.

Owing to EssilorLuxottica’s industry dominance, the retail price of glasses, especially ‘designer eyewear’, is overinflated, owing to licensing fees, wholesale markups approaching 100%, and retail markups around 200%. This journey to the consumer renders a pair of glasses that cost EssilorLuxottica $25 to manufacture to list for ~$400. As such, Warby Parker sees an opportunity to not only undercut the 800 lb. elephant on price by removing the middleman and offering fashionable eyewear as low as $95 a pair but also on customer satisfaction via its multi-channel platform.

To “cut out the middleman”, the company sources its materials (e.g., cellulose acetate) domestically, as well as from Italy and Asia, from where it is then shipped to its own optical laboratories (in New York or Nevada) or third-party labs in the U.S. and China for lens cutting and mounting into frames. From these labs, it is either shipped direct to the consumer or to one of its retail locations for pickup.

For customers who order online, it has two innovative apps that enhance the customer experience. First, its virtual vision test app allows for the computation of a prescription without making an appearance at a brick-and-mortar store. Second, since consumers would prefer to try on a pair of glasses before purchase, the company introduced an augmented reality app in 2019 that allows them to virtually try on a pair of glasses. On top of these novelties, Warby Parker will send up to five frames to the customer for an at-home try on. The glasses come with a 30-day money-back guarantee and a 12-month no-scratch guarantee.

To date, results have been impressive with the company boasting 2.15 million unique customers who have purchased eyewear from one of its channels in the past twelve months ending September 30, 2021. Its popularity is best exemplified by an extremely high net promoter score of 83 versus an industry average of 27. That satisfaction is also reflected in the fact that the company’s customers ended up spending 97% of their initial purchase on additional eyewear over the subsequent four years. The average customer spent $242 at Warby Parker (in the twelve months ending September 2020) with customer acquisition costs at only ~19%.

The online channel served Warby Parker well during the pandemic. Prior to, the company sold ~35% of its eyewear online and the balance through its retail locations. In 2020, that mix shifted to 60% online as all of its storefronts were closed for at least two months. As a result, revenue was only up 6% in FY20 versus FY19, but its competitors’ top lines declined ~10% over the same period.

The company currently generates ~94% of its top line from eyewear sales, ~3% from contacts, ~2% from eye exams, and ~1% on eyewear accessories.

Even though the pandemic compelled 60% of Warby Parker customers into purchasing online, only 8% of would-be eyeglass wearers – new and or otherwise – normally elect to purchase his or hers online. As such, Warby Parker is embarking on a significant brick-and-mortar buildout, where it has identified ~750 additional geographies that meet its operating requirements of $2,900 revenue per square foot, 35% operating margins, and a payback period under 20 months. The company added 31 locations in the U.S. and Canada for the 12 months ending September 30, 2021. Furthermore, it sees the expansion of its progressive and contact lens offerings, as well as its evolution to an holistic eye care company (i.e., more eye exams, more prescription eyewear and contact sales) as drivers of future growth.

The first nine months of 2021 (YTD21) were similar, with the Warby Parker generating Adj. earnings of $0.09 a share and Adj. EBITDA of $31.3 million on net revenue of $407.9 million versus a loss of $0.10 a share and an Adj. EBITDA gain of $6.6 million on net revenue of $280.9 million in YTD20, representing 45% improvement at the top line. Again, the comp versus YTD20 was easy as each of its physical locations were closed for at least two months.

The company expects to produce net revenue of ~$133 million in 4Q21, bringing its total for the year to $541 million. It does expect to lose $7 million at the Adj. EBITDA line in the final stanza as it ramps marketing spend, experiences higher shipping costs to expedite holiday orders, and beefs up staffing at its brick-and-mortar locations. These projections are based on range midpoints.

Over the long haul, the company anticipates at least 20% net revenue growth, 58%-60% gross margin, and at least 20% Adj. EBITDA margin.

That earnings report marked the all-time high ($60.30) for shares of WRBY, which have been cut more than in half since.

Warby Parker’s balance sheet was pristine, with cash of $266.2 million and no debt as of September 30, 2021. Although cash provided from operating activities was essentially flat in YTD21, the company’s storefront buildout drained $34.0 million from its coffers.

For a company that eschewed the traditional initial public offering route, Warby Parker enjoys significant sponsorship from the Street. Analysts have three buy and three outperform ratings against three holds and a median twelve-month price objective is in the low $50s. Their consensus expects the company to grow its FY22 top line over 25% to just less than $690 million in FY2022.

Durable Capital Partners has used the weakness in Warby Parker stock as an opportunity to load up, adding several million shares to its stake so far in 2022. Another beneficial owner added 1.3 million shares to his holdings last week as well.

Although Warby Parker has grown its revenue 45% YTD21 vs YTD20, its quarterly sequential growth is lacking. On its S-1 form, the company did not provide a breakdown of its first two quarters of 2021, only of 1H21 in which it generated net revenue of $270.5 million or an average of $135.3 million. In 3Q21, its top line was $137.4 million and 4Q21 is expected at ~$133 million, based on the company’s (and analysts’) full-year projections. There is no seasonality to Warby Parker’s business with the exception of the last weeks of the year due to holiday shopping and flexible spending account dollar usage in health care plans before expiration. As such, its growth spurt appeared to have hit a wall.

No quarterly sequential growth during 2021 despite opening 31 stores in the prior twelve months is concerning considering the market is still bestowing nearly a 4.5 price-to-FY22E net revenue ratio valuation – after the stock’s huge recent price decline – on shares of WRBY. Though no questions about this undercurrent were asked on its 3Q21 conference call, it appears the market has identified the sequential flatline that places the Street’s $690 million FY22 revenue estimate at risk.

Buying eyewear online is a disruptive business model. However, the amount of people willing to make that purchase online is a low ceiling, especially as the pandemic ebbs. That dynamic puts the company in the business of growing its top line by building out optical stores, like the ~41,000 already constructed by its competition. It may have cut out the middleman and has plenty of upside with less than 2% of the domestic market, but adding brick-and-mortar storefronts will eventually impel its rivals to lower prices, which will be outstanding for the consumer but not so great for Warby Parker. The business model and the company are very sound, but the price-to-sales valuation is not quite there yet. Therefore, we are passing on any investment recommendation around WRBY at this time.

Fourth quarter results should also be out shortly, giving investors a new and updated set of data points for consideration. Given the massive amount of buying by beneficial owners, this is a name we may revisit again in the near future.

Looking but not seeing is the hearing but not understanding of the eye.”― Mokokoma Mokhonoana

Bret Jensen is the Founder of and authors articles for the Biotech Forum, Busted IPO Forum, and Insiders Forum