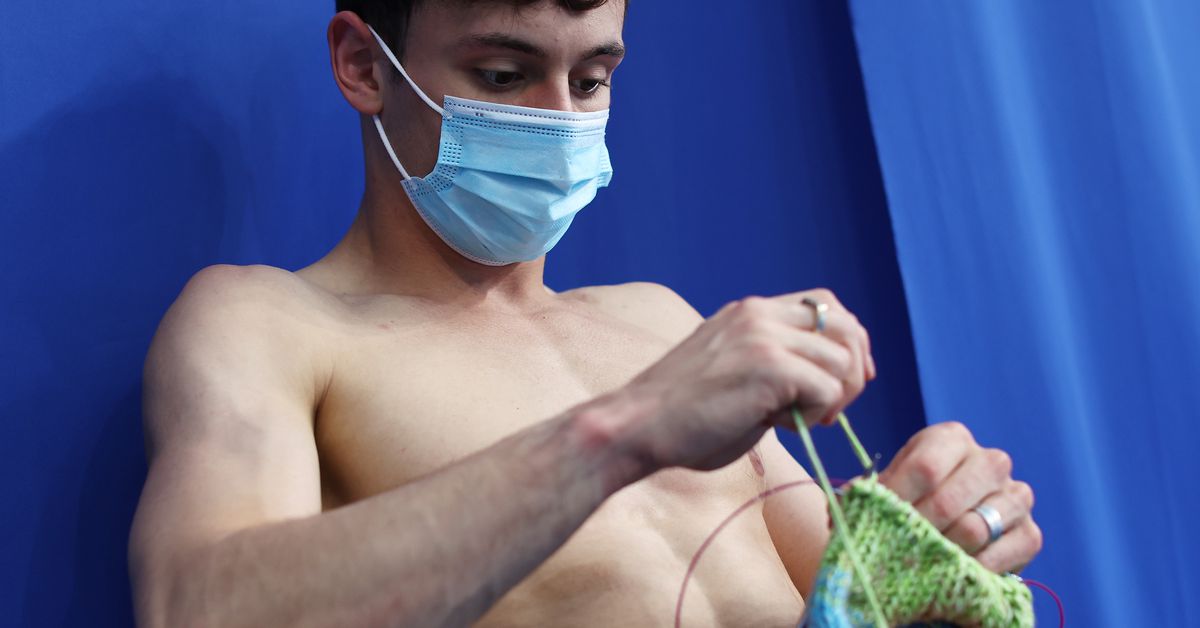 Thanks to one of the most inspiring gold medal stories of the year, Tom Daley became one of the biggest stars of the Tokyo Olympics. And in retrospect, another star of the Summer Games might have been Tom Daley’s knitting.

Striking while the iron is hot, the Olympic champion recently unveiled a line of knitting projects and clothing styles under his new Made With Love By Tom Daley label. Dropping just in time for the holiday season, Daley’s designs have been flying off the shelf, with a few already selling out.

As Outsports’ resident Daley fanboy extraordinaire, I couldn’t let this news go without giving you my thoughts on the looks he unveiled. And I wasn’t going to let a minor detail like “not knowing a damn thing about knitting or fashion” get in the way.

With that in mind, here is my definitive guide to the Made With Love By Tom Daley line…

The pom pom beanie is a nice overall design. It presents a good challenge for novices like me and seems like it would keep your head warm. But it’s also a bit plain and it seems like what would stand out most about it is being able to say “I made this!”

Don’t get me wrong, if I tried to knit this hat, my No. 1 goal would be “don’t end up in urgent care.” But compared to the other items in the Made With Love line, this one looks the most like it’s for beginners.

Another good project for newbies, this one gets a higher score for working in more colors and for creating what appears to be the widest scarf in recorded human history. It’s a great way to tell your friends “I’m learning how to knit in my time away from my day job of being Mr. Fantastic.”

Crocheting is one of my mother’s favorite things in the world. These plush flamingos are the only crochet kit available in the Made With Love line and I have no doubt they would make her exclaim, “Oh, that’s cute!” Which is Ken’s Mom-speak for “10 out of 10, no notes.”

Sometimes handmade stuffed animals have an unfortunate tendency of turning into nightmare fuel but these flamingos are the opposite. I like how you have the option of giving the body a smooth crochet look or making the plumage stand out with a more tufted texture.

The mop of multi-colored hair on top is adorable and actually seems to be a bit more punk than Elvis. But I supposing “Flaming Sex Pistols” was probably not the image Daley was going for.

Made With Love Rainbow Tee

I’m very fond of this shirt because the design is simplicity itself and yet the rainbow heart still jumps out to make a statement of Pride. It’s only when you look closely that you see the heart is designed to look like it was knit onto the shirt.

But what makes this a winner is that compared to the knitting kits, the only skill it requires is entering my credit card number on the order form. Which, in my case, is the best way to ensure that the finished product looks like anything other than a giant pile of yarn, thread, and tears.

Made With Love White Logo Sweatshirt

Here’s where color makes a huge difference. In black and white, this shirt looks like it comes from Made With Love By Spinal Tap.

While the simplistic design of the rainbow T-shirt works in its favor, the plain white heart actually feels a little too basic and even a little dystopian. Almost like a Care Bears villain put a curse on this sweatshirt and used it to banish all rainbows from the planet.

I don’t want to purchase this shirt so much as Care Bear Stare at it until it learns to love again.

The bubble stitched arms on this cardigan really make for a fun fashion choice. And you can tell I’m impressed with them because right now I’m staring at a picture of Tom Daley and I’m focusing on … sleeves. Which might be as big an upset as his Olympic win over the Chinese diving team.

As regular viewers of Daley’s Youtube channel know, the man is obsessed with Christmas. So it would be a given that his Christmas jumper design would have to go the extra mile and this one stands out in a great way.

Instead of going the clichéd ugly sweater route, Daley chooses to create something more along the lines of “Christmas sweater that got stuck in the wash with Joseph’s Amazing Technicolor Dreamcoat.” The effect blends flair with a classic look and the result is just the right amount of each.

Given that this design also adds a proper level of gay to the Christmas palette, the only deduction I’m giving is because the jumper does not autoplay “All I Want for Christmas Is You.”

These two sweaters make for a total of three projects in the Made With Love line involving flamingos. Now, I’ve watched a lot of Tom Daley videos over the past half-decade — for purely research purposes, of course — and I can’t remember him mentioning flamingos once.

Maybe he discussed them in one of his shirtless clips. More research!

These are the sacrifices I’m willing to make to better inform the public.

I like both of these jumpers a lot and the color palette sizzles in Flamingo’s Favourite. But the hot pink on black look for Flamin-Go For It absolutely wins the day. It’s my personal favorite and the coolest looking design in the entire Made With Love catalogue because the black base makes the colorful image and fluffy texture pop even brighter.

The best way I can sum it up: when I saw this look, I made the exact same sound as Dustin Lance Black watching his husband win gold.