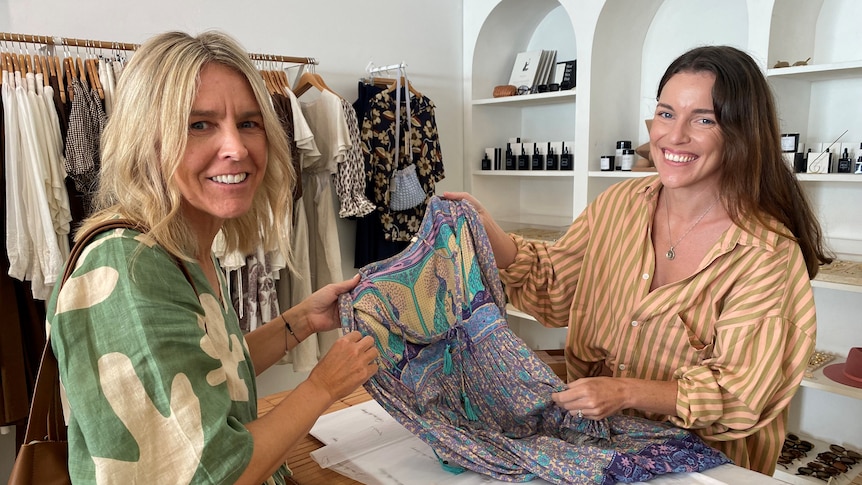 In the postmodern world of fashion, there is a well-worn saying that everything old is new again, as brands recycle past trends for the latest generation.

At fashion brand Assembly Label, this concept is quite literally true.

“The purpose of it is to extend the life cycle of Assembly Label clothes,” he says.

The scheme is launching in the chain’s 16 stores nationally from this month.

Reworn encourages people to bring back clothes that they’ve bought off the label previously and aren’t wearing anymore. The incentive for them to do this is 10 per cent off their next purchase instore. Assembly Label then re-sells the old clothes and keeps the cash.

It has already trialled this scheme at one of its Melbourne stores, where it got back 750 items from customers and re-sold them in less than a month.

Downstairs at its Fitzroy store it continued to sell men’s and women’s clothing in its signature muted colours, with prices ranging from around $50 upwards. Upstairs, it was re-selling items that had already been worn by customers, for around half their usual price.

“So it completely sold out, which was definitely overwhelming,” Thompson says.

On a smaller scale in regional South Australia, another boutique is getting into this trend too.

Tara Rowe is also getting her customers to bring back clothes they’ve bought off her anytime since her shop, Call Me The Breeze, opened in 2014.

Instead of offering a discount, the Port Lincoln boutique is giving people who bring back their old fashion an actual voucher for the store. They get back 25 per cent of their old item’s original purchase price.

“So if someone bought from us a $200 dress within the last eight years since we’ve been open, and they have proof of purchase, they can return it for a $50 gift voucher,” Rowe says.

“It’s just trying to make it easier for people to sell the items that they have sitting in their wardrobe that are gathering dust, and someone else might love them and give them a new home.”

This trend is starting as second-hand fashion booms

No longer associated with mothballs and op shops, second-hand clothing has grown into a major global industry worth $175 billion annually, according to analytics company Business of Fashion.

There’s less data on how much it’s worth specifically here in Australia, but anecdotally, second-hand clothing is becoming a significant part of the fashion industry, as shoppers seek out bargains and sustainability.

Much of the growth here so far has come from second-hand stores.

There’s now several chains across Australia that let people wander in off the street with their unwanted clothes and sell them instore on a consignment model.

Goodbyes is one of those chains. It now has five shops nationally.

“Items are held at our service locations on consignment for seven weeks instore. When an item sells, proceeds are split between Goodbyes and the seller,” Goodbyes director Monique Thomas says.

“Since opening, we’ve seen considerable disruption and growth in the resale and second-hand industry. Seven years on, there are more options than ever for people to shop and sell second-hand.”

“eBay has been around since the dawn of the consumer internet,” fashion industry re-sale expert Amelia Crook says.

These include Depop, AirRobe and Vestiare, the latter of which Gucci’s owner Kering took a 5 per cent stake in last year. The amount that these websites take off sellers in commission or fees varies.

There’s also a lot of old clothing being sold organically on social media, including Facebook and Instagram. Again, there’s little data on exactly how much in Australia.

Through her company Ownershift, Amelia Crook is helping brands realise just how much of their product is being re-sold in the secondary market at any given time.

“We recently did a snapshot for a brand that everybody would know. And there was over $2 million worth of items in circulation across eBay, Facebook marketplace, AirRobe and others,” Crook says.

“There is value on the table for brands to enter this market.

“We’ve seen the Boston Consulting Group say that about 25 per cent of wardrobes are going to be second-hand in the next few years. And that means if brands aren’t involved in the second-hand business, they’re going to lose their customers.”

Enter the idea of brands re-selling their own clothes.

“Second-hand is a huge growing market,” Call Me The Breeze’s Tara Rowe says.

“And if we don’t do something different about the way that we’re selling clothes now, then we’re going to sort of miss the boat.”

Can brands make re-selling their own clothes profitable?

The companies that are starting to get into the re-sale space are hoping customers will bring them back their old clothing because it’s easier than re-selling it themselves.

As anybody who has ever tried to re-sell items on Facebook may attest, it sometimes feels half worth it after you’ve cleaned the item, listed it, and then haggled with 40 different people over its price.

“I think there’s a real benefit of just being able to walk into the store that you bought (an item) from and return it, and you get a gift voucher and you don’t have to deal with any of the selling process,” Rowe says.

The vouchers and discount codes also come with an added benefit for the company, because it helps brand loyalty and keeps customers returning back instore. Selling second-hand also opens up their brand to a different market.

“I think it will open up new doors for us in the sense that we might take on new customers who previously maybe couldn’t afford a $300 dress or a $400 dress at our store,” Rowe says.

However, Call Me The Breeze is still figuring out how to make this all profitable. At this stage, Rowe just wants to break even on the scheme, and says it’s more about ensuring they take responsibility for the products they sell.

“We felt that we needed (to) create a business model that keeps our clothes in the loop and out of landfill,” she says.

“It has always been important to us to be a sustainable boutique.”

While the brand is technically getting their own items back for free to re-sell, Assembly Label’s Lee Thompson also says they don’t think Reworn will be hugely profitable anytime soon.

That’s because it’s selling it’s own items the second time around at a significant discount of 50 per cent from the original price. It’s also spending time and money cleaning, repairing and re-listing these items.

It’s also partnering with a recycler, where it is sending all the clothing that it gets back, that is too damaged to re-sell through Reworn.

“Selling recycled clothes is nothing new. It’s existed for a very long time.

“For us, it’s just making sure that this is an alternative way for people to be able to do it, and take control of the life cycle of our own products.”

Both of the brands do sell mid-tier, less trend based fashion.

This may give them more of an edge in re-sale than cheaper fast fashion labels, where the value of a new item can drop as quickly as the latest style goes out of fashion.

This trend is more advanced globally, especially in the United States.

There, fashion sustainability advocates the Ellen MacArthur Foundation have voiced concerns that the trend may not end up sustainable if it just fuels more consumption.

“These models do not always lead to environmental benefits, particularly, if they are seen purely as ‘add-ons’ to a traditional wasteful model as opposed to central to all business activities,” one of the foundation’s reports summarised.

“For example, incentivising product take-back for resale, remaking or recycling by offering vouchers for new products may fuel more production.”

“Recycling or resale schemes attached to businesses that produce high volumes of low quality can start to feel a bit murky,” she says.

“The potential downside is encouraging people to just buy more stuff,” she says.

“But the opportunity is to learn about valuing clothing and taking care of what we have, and we’re being reminded that we can actually re-sell it.”

McCallion says if brands can figure out how to make this space profitable, it will create a naturally self-sufficient model where items don’t end up in landfill or unworn.

“Brands have spent a lot of time developing beautiful products and putting them into the market. What’s wrong with wanting to sell them more than once?” she says.

“We have mainstream resale in lots of other settings. So we always think about reselling our cars, or maybe reselling tools.

“I think it’s great to see brands realising that their product can be resold a few times.”