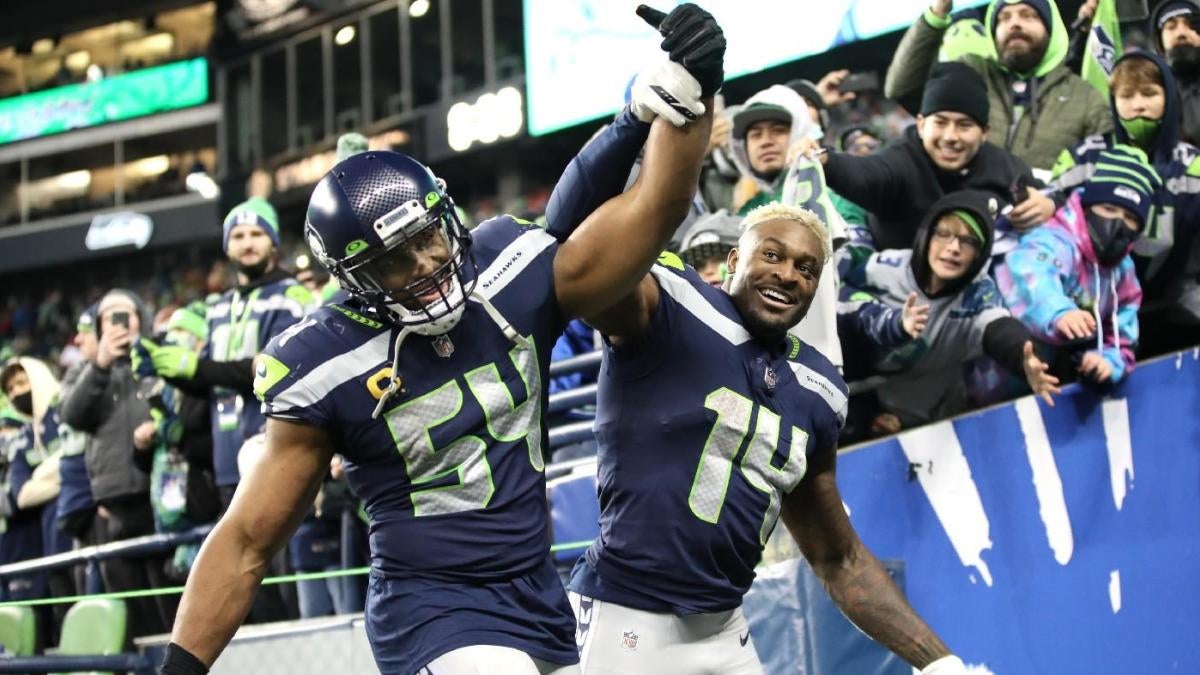 It’s the 13th Sunday of the 2021 NFL season and we’re keeping you updated on all the action and biggest storylines throughout the day. The Week 13 slate has some fantastic matchups and storylines, and we’re here to help you watch it unfold. Check back often to find out everything you need to know.

The 49ers had absolutely no business having a chance to tie or defeat the Seahawks in the final moments. Seattle was literally two yards away from going up two touchdowns — and even if it kicked a field goal it would have led by two possessions — with about four minutes left. But Gerald Everett, who already fumbled once and bobbled away an interception at the goal line, lost another fumble that gave San Francisco life. The 49ers responded, driving 95 yards to set up a first-and-goal from the 7-yard line with 38 seconds left, but Seattle stuffed two runs and then forced two incompletions to snap its three-game losing streak. It’s also won 15 of its last 17 games against the 49ers dating back to the 2013 NFC title game, according to Sports Illustrated’s Albert Breer.

Give us Steelers-Ravens four times a year because it’s the best! In Sunday’s battle, the Ravens responded to the Steelers’ touchdown in the final two minutes with their own score with just seconds to play. But instead of kicking the extra point to send the game to overtime, John Harbaugh went for the two-point conversion to try and beat their division rival in thrilling fashion. The play call was perfect, as Mark Andrews had a walk-in touchdown running free to the right. However, Lamar Jackson’s pass was a little wide, tipping off the fingers of Andrews and falling to the grass to give Pittsburgh a potential season-saving victory.

After trailing for 57 minutes, 12 seconds, the Steelers took their first lead on a five-yard touchdown from Ben Roethlisberger to Diontae Johnson, who stumbled before getting his feet under him, making the catch and diving across the goal line. Pittsburgh also converted the two-point conversion to go ahead by seven.

Brian Johnson, signed earlier this week after Joey Slye injured his hamstring on “Monday Night Football,” walked onto the field for his first field goal attempt in a Washington uniform. The circumstances: 41 seconds left, down by one and 48 yards separating Washington from potentially winning its fourth game in a row. The kick initially looked like it would go wide right before sneaking just inside the upright for what would be the game-winning score.

Make that two touchdowns in as many games for Odell Beckham Jr., who hauled in a jump ball for a 1-yard touchdown to cap the Rams’ explosive offensive performance against the Jaguars.

Gerald Everett owes Carlos Dunlap big time, because veteran pass-rusher responded to Everett’s brutal goal line bobble (see below) by sacking Jimmy Garoppolo in the end zone for a safety that tied the game at 23.

From TD to INT

In a play that epitomizes the Seahawks’ disappointing season, Gerald Everett bobbled a would-be touchdown twice, the second of which resulted in the ball popping into the air and into the hands of K’Waun Williams for a back-breaking turn of events for Seattle.

There were at least five steps in which most NFL players would accidentally step out of bounds running down the sideline. But George Kittle is not most NFL players, and he did his best stuntman impression by someone keeping his feet in the field of play as he rumbled down the left sideline for a 48-yard touchdown, his second of the afternoon.

Kupp back in end zone

Cooper Kupp entered Sunday tied for the NFL lead with 10 receiving touchdowns despite not having found the end zone the past three weeks. He ended that drought in the third quarter Sunday, beating his defender on a slick slant route and streaking into the end zone for the 29-yard score to extend the Rams’ advantage.

DK Metcalf is one of the best young wide receivers in the NFL, but he’s been a nonfactor for the Seahawks over their past three games (eight receptions for 70 yards combined). He made a huge play Sunday, though, hauling in a deep ball from Russell Wilson for a 33-yard gain on third-and-14. Two plays later, newly acquired Adrian Peterson rumbled in for his 120th-career rushing touchdown.

A turnover and George Kittle — that’s the combo that allowed the 49ers to tie the game in the first quarter Sunday. First Gerald Everett fumbled the ball that Emmanuel Moseley recovered, and on the next play, Jimmy Garoppolo found Kittle open in the middle of the end zone for the 24-yard score.

The Seahawks have nothing to lose having lost six of their past seven, and they’re playing like it early against the 49ers. Instead of kicking the ball back to the 49ers on fourth-and-six, Travis Homer took the direct snap from the Seattle 27-yard, ran around left end and sprinted untouched all the way into the end zone. What a call from Pete Carroll.

They’ve done it! The previously 0-10-1 Lions have finally won a game and did so in dramatic fashion. Trailing 27-23 with 1:50 to play, Jared Goff led Detroit down the field on a 14-play, 75-yard drive with no timeouts. And on the final play, a fourth-and-two from the Vikings’ 11-yard line, Goff found Amon-Ra St. Brown for the score that will ensure there are no winless NFL teams during the 2021 campaign.

In seemingly the most Vikings-Lions game ever, Minnesota spotted Detroit a 14-point halftime lead before methodically closing the gap and then delivering what seemed to be another dagger in the Motor City with Justin Jefferson’s go-ahead touchdown with fewer than two minutes to play.

Just when you think the Lions are on their way to win No. 1 of 2021, they find a way to allow the other team back in it. That’s exactly what happened against the Vikings, who have pulled within two points on a diving catch from K.J. Osborn.

The Bengals-Chargers game has seemingly had everything, and add a fumble return for a touchdown to the list. Inside the Chargers’ 35-yard line, the Bengals appeared prime to completely erase the 24-point deficit until Joe Mixon fumbled, allowing Tevaughn Campbell to scoop it up and return it for the easy score.

The Dolphins, looking for their fifth straight win after starting 1-7, are on their way to a victory against the Giants. Tua Tagovailoa’s short touchdown pass to Isaiah Ford to begin the fourth quarter put Miami up 11, which seems pretty insurmountable the way New York has looked with backup quarterback Mike Glennon.

Make that 90-career touchdown passes from Tom Brady to Rob Gronkowski — the second-most by any combo in NFL history in the regular season behind Peyton Manning and Marvin Harrison (112). Their most recent hookup came late in the third quarter against the Falcons when Gronk gained enough separation from his defender and Brady put the ball right where it needed to be for the 11-yard score.

The double-pitch to Andy Dalton, who was split out wide, nearly turned disastrous, but Dalton was able to shake off the defender, flip his hips downfield and locate a wide open Jakeem Grant streaking down the right sideline. Grant ended up gaining 34 yards, which set up a Bears touchdown to cut the lead to 24-14 against the Cardinals.

The Texans have hung tough against their division rivals, but there was nothing their defense could do to prevent Ashton Dulin from putting the Colts up two scores. It was a great throw from Carson Wentz and an even better grab from Dulin for the two-yard score.

Tom Brady had been magnificent so far in Atlanta, yet his final throw before halftime was AWFUL. With Tampa Bay backed up and just 25 seconds to play in the second quarter, Brady choreographed the check-down pass to Leonard Fournette and paid the price, as defensive end Marlon Davidson secured what will almost definitely be the easiest pick-six of his football life.

To say the Giants-Dolphins game has been uninteresting would be an understatement, but the Dolphins provided some exciting action at the end of the half. With the game tied at three, Miami went on a 14-play, 89-yard drive that Tua Tagovailoa capped with a five-yard touchdown pass, which Mack Hollins initially juggled before hauling it in just as his momentum carried him out of bounds.

Tom Brady has been absolutely on fire in the first half in Atlanta. He’s completed 20 of his first 26 passes for 216 yards, three touchdowns and a quarterback rating of 139.3. Rob Gronkowski caught the latest score to put the Buccaneers ahead, 20-10.

The enigmatic Vikings are at it again, falling behind to the winless Lions in the first half Sunday. Detroit extended its advantage to 14-6 with a pretty throw from Goff to Brock Wright for the 23-yard score.

Still looking for their first win of the season, the Lions are off to a great start (by their standards). By way of a touchdown pass from Jared Goff to T. J. Hockenson, Detroit has the lead over Minnesota in the second quarter.

Cordarrelle Patterson, Mike Davis, it doesn’t matter. The duo has combined for 69 yards rushing in the first quarter alone, with Patterson breaking off a 39-yard run against the Buccaneers and Davis barreling into the end zone from 17 yards out.

Welcome back Kyler and DeAndre

Remember Kyler Murray and DeAndre Hopkins — one of the best quarterback-wide receiver duos that has been sidelined since Week 8 with injuries? Well, they’re back on the field and already wreaking havoc against the Bears. On 4th-and-2, Murray floated the ball up for Hopkins, who made the contested catch while somehow getting both feet in bounds for the 21-yard score.

With Jalen Hurts nursing an ankle injury, the always entertaining Gardner Minshew is back as an NFL starting quarterback. He wasted little time reminding the football world of his talents, as his first possession ended with a 36-yard touchdown to Dallas Goedert.

Leonard Fournette cannot stop scoring touchdowns. He racked up four in the Bucs’ thrilling come-from-behind win over the Colts last week, and he added a fifth on the sweet one-handed grab on the opening possession versus the Falcons.

We’re into December, and that means there are bound to be NFL games affected by adverse weather conditions. In Week 13 there are a few where trying to throw the ball could get tricky. That starts in Chicago, where Kyler Murray returns to action just in time for rain and wind. Things shouldn’t start off too ugly — the weather.com forecast calls for a 37% chance of showers and 14 mph winds at 1 p.m. ET kickoff — but that increases to a 47% chance of rain by 2 p.m. And it’s up to an 80% chance by 3 p.m. for the second half.

Elsewhere, the Chargers-Bengals and Ravens-Steelers games don’t look as bad as initially thought, with just a 15% chance of rain throughout the game in Cincy and only wind to contend with in Pittsburgh. But on Monday night in Buffalo, though there’s only about a 10% chance of rain or snow when Mac Jones and the Patriots come to town, winds are expected to reach 26 mph.