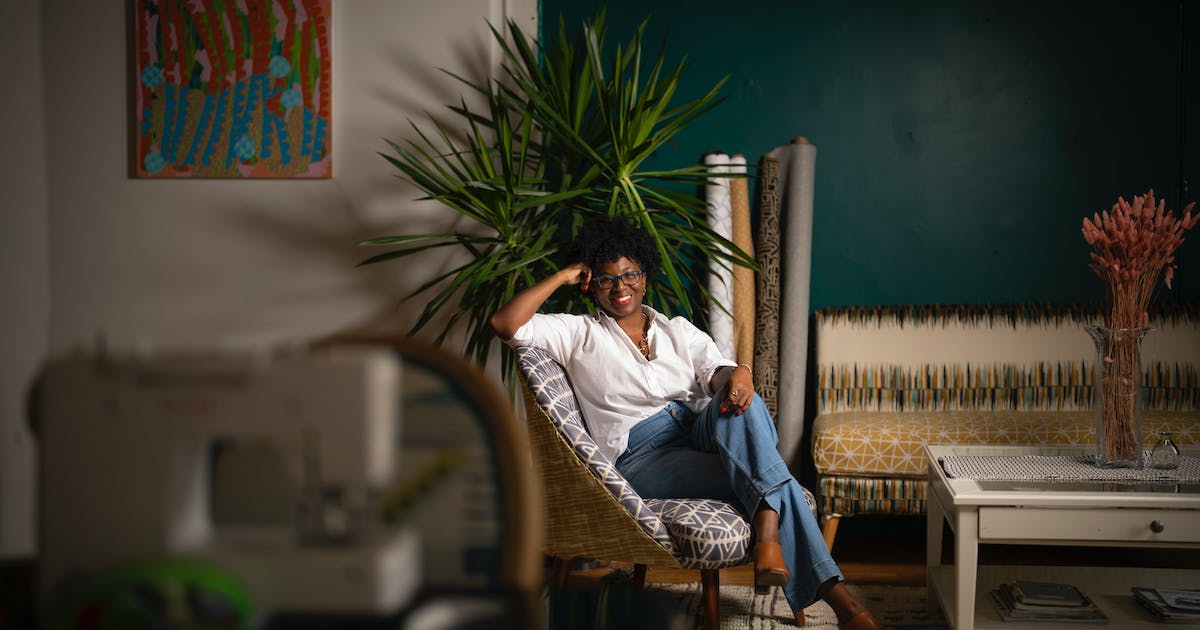 Now, the Minneapolis furniture designer and upholsterer known for mixing vibrant colors and bold patterns is ready for the World Market stage.

“Nicole’s approach to design caught our eye as we are always looking to acquiring eclectic, artisan pieces in our assortments,” said Terri Daniels, World Market vice president of merchandising home and trend. “In addition to highlighting the fine craft of upholstery, her unique eye for color and pattern mixing on traditional silhouettes resonated with our brand.”

Crowder said the upholstered pieces are meant to be stylish yet timeless enough that they could be passed on from one generation to the next.

“I was really inspired by this idea of making new heirlooms that folks could pass down to their families,” she said. “I wanted more color and printed color. Even if it’s just in moderation with two different prints versus monochromatic.”

Crowder incorporated her signature style of bold colors and prints that are infused into shapely furniture. While she typically sources prints, patterns and fabrics from other designers, she created her own for the World Market collection. Geometric shapes reign, though tropical themes can be found, too.

A Marie Tub Chair features triangles with gray and yellow hues. The Erin Bench, a nod to midcentury modern, spotlights an upholstered bench with a geometric-patterned deep blue and ivory cushion framed with acacia wood seat and open shelves and rounded out with gold-capped legs.

Then there’s the Elaine Loveseat, a curvaceous settee, as well as the Malia Storage Ottoman, both adorned in banana leaf patterns in a pronounced green hue.

“I really love geometric prints. It’s something that can ground you and I wanted something that didn’t feel chaotic,” Crowder said. And “green is my favorite color for upholstering. I wanted to create a piece that was an unapologetic pop of color that felt lush and inviting.”

The collection fits with her design philosophy that furniture should be designed for a runway — a cohesive collection with a strong editorial.

“I always look at chairs as being dressed,” she said. “They’re dressed for fashion and have a theme throughout the line.”

Crowder’s journey to becoming a furniture designer began in 2012. She was living in Washington, D.C., at the time and deep into another craft she loved — photography.

“I was working as a photo editor when I discovered upholstery. The house I lived in had a lot of space for storing furniture so I started to work on chairs, ottomans and benches,” she said.

Crowder would shop antique sales and Craigslist for chairs to reupholster and spruce up. She taught herself through YouTube and trial and error.

“I started selling at farmers’ markets,” she said. “That’s when I learned of the lack of upholsterers in the D.C. area and started gaining clients.”

Before she knew it, Crowder was in high demand for upholstering sofas, loveseats and other furniture pieces. With business booming, Crowder rented a full-fledged studio. Eventually, she outgrew that studio and moved into a larger one.

In June 2020, Crowder planned to move to Los Angeles to continue a career in furniture design and upholstering. But after visiting family and friends in Minnesota, she realized she wanted to move back and base her business out of the Twin Cities.

“I grew up as a military kid. I was born in Germany and traveled to different countries and cities. Eagan is where I went to elementary school before moving out East,” she said. “The city has so much to offer in terms of the food scene and creatives. It felt more calming. I felt like I could just create.”

In September 2021, Crowder opened a studio in the Casket Arts carriage house in northeast Minneapolis. Her 1,300-square-foot studio is filled with upholstered pieces she created — couches, chairs, decor — and others in progress.

In addition to the World Market collection, Crowder is working on a tablescapes series as part of her personal collection — napkin rings, table runners, placemats and more. In addition, she’s in talks with a Canadian production company about a design show on the upholstering process.

Crowder said she’s happy with her work for World Market, which is part of its Celebrating Designers of Color spotlight.

“They wanted my aesthetic and didn’t want me to change it or water it down. It allowed me to show my skills in a broader way. I could be as loud or as vibrant as I wanted and they trusted there was an audience for that,” Crowder said.

And she hopes the collaboration is a springboard for other designers of color.

“To have a Black furniture designer in a major retailer like this is huge,” she said. “I hope it opens up more doors for others.”