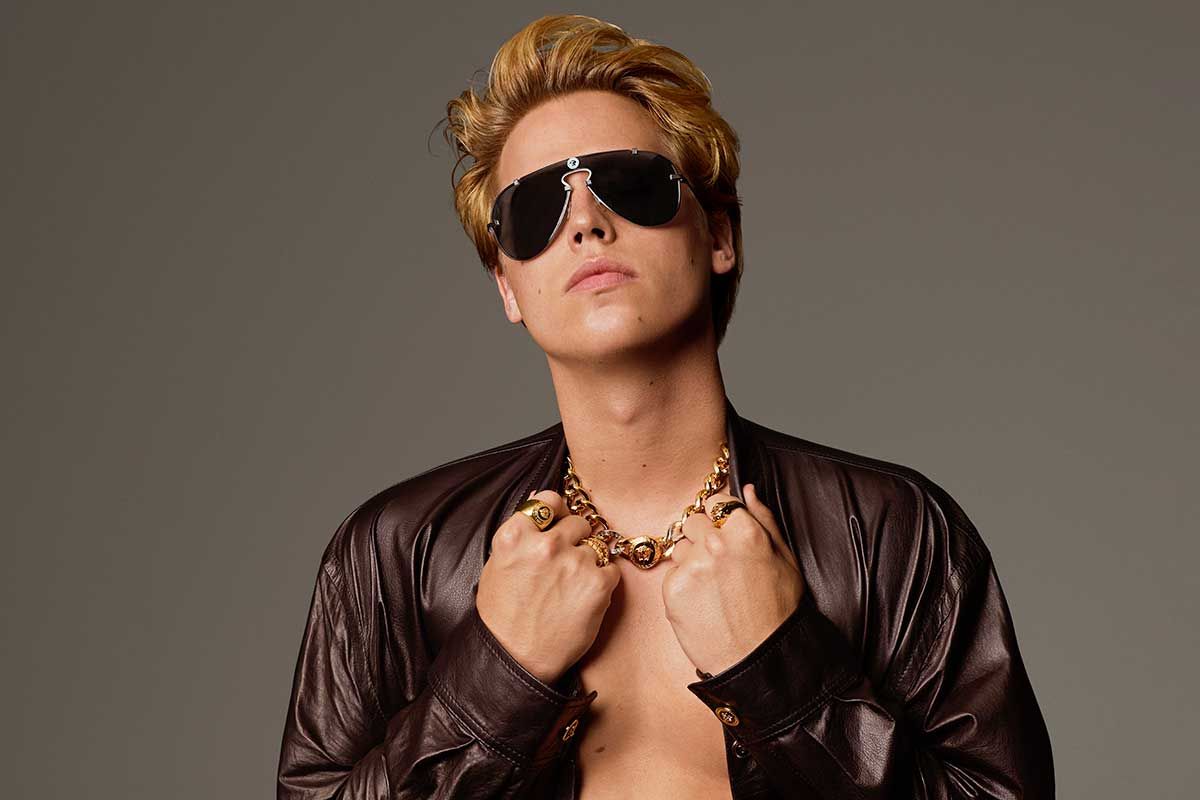 In a not-so-distant past, Cole Sprouse turned up at every event in relatively low-key suits, rarely flexing anything more adventurous than a pair of high-rise trousers. Simply put, the Riverdale star was admittedly classy but hardly flashy.

Over the pandemic, though, Sprouse has metamorphized into the very image of pomp and circumstance, dripping in patterns and taking the gold pill with head-to-toe Versace.

Sprouse’s open embrace of the sumptuous Italian house began when Versace cut a relatively plain pinstriped suit for him several years ago, though he’s since swapped Versace’s understated tailoring for the house’s baroque-printed pajamas. Subtlety be damned.

It’s all part of Sprouse’s ongoing fashion evolution, going from Vineyard Vines king to an open embrace of the joyful gaudiness he embodied at the 2019 Met Gala.

Perhaps we have Donatella Versace to thank, ‘cuz the two are apparently close enough that she could coax Cole into taking the lead in Versace Eyewear’s new imagery, the actor’s first proper fashion campaign (he’s done a few ads and magazine editorials before, though).

It didn’t hurt that photographer Steven Klein, one of Sprouse’s photographic mentors, was also involved.

“I’ve had the pleasure of working with Steven three times now,” Sprouse told Highsnobiety exclusively. “Each opportunity, I feel like a student.”

“Steven and his team are masters of tone and lighting. I’d be lying if I said I don’t take notes on specific setups they construct while on set. I’ve already implemented some of his practices into my personal photography work.”

But why Versace? Why now?

“It’s as complicated as wearing the clothes that make me feel good. Or at least that’s the way it started,” Sprouse continued. “After my initial connection to Donatella and the team, the relationship to Versace has, understandably, deepened.”

“They all welcomed me with open arms, and a bit of that warmth I wear with me now whenever I put on an article of Versace. I was born in Tuscany, and so I’ve also had the tremendous pleasure of being able to return to my birth country of Italy alongside Versace.”

Available for for $278-$368 at Luxottica-owned eyewear outlets SunglassHut and LensCrafters, plus select boutiques like Bloomingdales, Bergdorf Goodman, Saks, and Nordstrom, the new Versace eyewear is bolder than anything we’ve seen Sprouse wear before, aside from the aforementioned Met ‘fit.

But it’s all part of the personal growth that comes from working with creative folks. The relationship with Versace, in particular, moved Sprouse enough to finally partner with a fashion brand in a professional sense.

“From a professional viewpoint I hadn’t allied myself in any sort of exclusivity with a brand during my career, and when I felt welcomed by Versace it all made lucid sense to me,” he said. “Both business and pleasure.”

This isn’t to be Sprouse’s only adventurous fashion foray, though even the especially eloquent actor doesn’t know exactly what’s up next.

“I think everyone has deep fashion aspirations, even if they may not proclaim it,” Sprouse considers. “From the second we put on our outfit in the morning we’re consciously or subconsciously asking for a curated interaction with our environment based on our experience within that environment growing up.”

“I believe that self-representation is critical to how we maneuver our world, and in that way I’d say I’ve started the line of questioning that point me toward bigger aspirations in fashion.”

Fitting, then, to dress a renaissance man in an Italian brand like Versace.