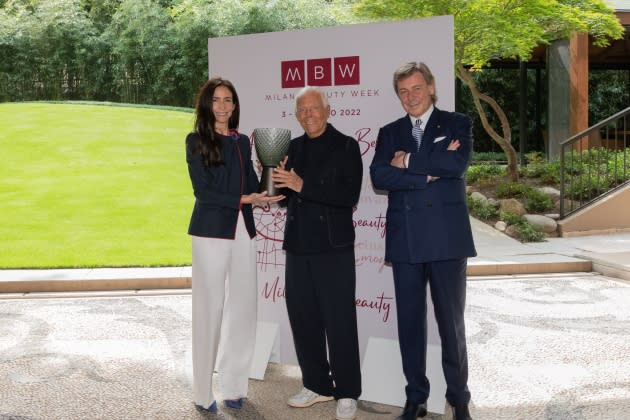 MILAN — A lot of effort went into setting up the first Milan Beauty Week but, albeit noble, organizers’ ambition to replicate the buzz surrounding the city during Design Week and its Fuorisalone format might take longer than expected to reach. As the saying goes, Rome wasn’t built in a day, and it will take more Beauty Weeks to turn the city’s beauty event into one that could compete with the fellow fashion and design formats.

Climate didn’t help either. The rainy weather tested the endurance of even the most passionate beauty fans and hampered the spirit of discovery the consumer-facing initiative was imbued of, impacting attendance to the many events beauty retailers staged around the city.

Running last week — right after Cosmoprof Worldwide Bologna closed its five-day show on May 2 — Milan Beauty Week involved more than 100 companies and stores through different formats for a total of 900 events, all free and open to the public.

The symbolic epicenter of the project was concentrated in the city’s central Palazzo Giureconsulti, which was turned into a Beauty Village hosting panels, workshops, laboratories and charity events related to the cosmetic world, welcoming more than 10,000 visitors.

On the institutional front, the highlight was the event opener, when Cosmetica Italia and Accademia del Profumo — national associations of beauty and fragrance companies, respectively — bestowed a special award to Giorgio Armani. The designer was celebrated for having won the highest number of Accademia del Profumo prizes in the organization’s history, which traces back to 1990.

In handing the award to the designer, Accademia del Profumo’s president Ambra Martone called Armani “icon of the city of Milan” and praised all the olfactory creations that contributed to his success in beauty and earned him recognitions from the association. These included Acqua di Giò in 1997; the Sì fragrance in 2014 and its Sì Passione flanker in 2019; the My Way scent, which was the first to be recognized for “responsible innovation” last year and the several Armani Privé perfumes that made the brand forerunner of the high-end perfumery segment.

While product testing, beauty sessions and consultancy were the most immediate implementations for companies to be involved in during the seven-day event — especially for retailers from Sephora to local indie perfumeries — some brands strategically leveraged the Beauty Week to open new stores.

Guerlain launched its first Italian unit in tony Via Montenapoleone. Dominated by white marble, wood furniture and gold details, the intimate space nestled in the city’s Golden Triangle carried the brand’s whole offering, including the high-end fragrance collection L’Art & La Matière and its personalization service of the flacons, as well as the Orchidée Impériale skin care range. Other services offered at the store included engraving initials on products, one-to-one consultancy and flash makeup sessions.

Moving to the artsy Brera district, Laboratorio Olfattivo was the latest addition to what is considered the go-to area for niche fragrances. The perfume brand launched by Roberto Drago and Daniela Caon in 2009 found its first Milanese home next to the Amouage store and on the opposite side of retailers like Le Labo, Caudalie and Dr. Vranjes Firenze. The unit is not far from the new Officine Universelle Buly 1803 boutique and other key players such as Campomarzio70, Montale Parfums, Olfattorio Bar à Parfums and Acca Kappa, too.

Defined by a minimal and contemporary interior concept, the Laboratorio Olfattivo store is set to host workshops, events and installations in sync with the brand’s mission of promoting the olfactory culture.

The Beauty Week also marked a maturity step for indie brand Permano, which opened its first store in another buzzy shopping area and commercial part of the city, not far from the central train station.

Founded by Edoardo and Gabriele Giaroli along with a pool of young entrepreneurs hailing from different industries, the brand launched during the pandemic with the goal to elevate hand care and retool daily gestures into appealing and sustainable experiences. Infused by a mint color, the store in Via Tadino reflected this mission with its essential space, where the focus is a communal table furnished with a sink to test products and get hand treatments.

“We don’t want to consider this a shop but an opportunity to meet people. The goal is not to sell but to know better our audience and grow a community because that’s what will eventually drive sales later,” said Edoardo Giaroli, who’s an architect with a background in the fashion industry, too.

Also in light of his former experiences, Giaroli’s approach is different from other start-ups that are focusing on online and d-to-c. “We believe that to build a brand positioning is key, and that means be present in physical stores. So our first year we focused on the wholesale distribution, in premium niche retailers, and this enabled us to build the base of our identity and be recognizable,” he said, revealing that the company will soon complete a seed round to further growth. Permano also just signed deals with three distributors to expand in Germany, Austria, Switzerland and the U.K. as well as in talks to enter the French and Japanese market.

Pop-up stores additionally mushroomed across the city and were particularly attractive during the Beauty Week for their intrinsic temporary feature as well as for spotlighting lesser-known brands for Italian customers. Cue Swedish natural label L:A Bruket, which set a pop-up at 10 Corso Como to present its new lip care collection along with its skin and body care assortment.

Collistar offered an immersive experience through its “Casa Collistar” pop-up installed at the landmark Villa Necchi Campiglio location. Here a multisensorial journey deep dived on the Italian brand’s values and its bestsellers while live masterclasses on makeup and “face training” to optimize the skin care routine were staged and open to attendance upon online booking.

Dr. Hauschka’s vintage Airstream trailer touched base in Milan to offer free consultancy for face and body routines, make-up tips and hand massage sessions. Christian Louboutin Beauty opted for bicycles instead, along with a presence at the Rinascente counter, where flash makeup sessions were offered.

The department store’s beauty floor had several similar implementations, and also hosted the first Manucurist pop-up store in the country, which will run until May 16. Set up in Rinascente’s Annex division, this pop-up enabled adults and kids to get free manicures in collaboration with local on-demand service company Madame Miranda and discover the clean nail care label founded in Paris in 2015 by Gaëlle Lebrat-Personnaz.

Conscious about the heightened traffic in-store, Rinascente also took the chance to launch a charity initiative during the beauty event. Until the end of May, for all purchases made at the Beauty Bar in the Annex division — which is dedicated to international indie brands — the retailer will give 5 percent of sales at the “Fondazione Humanitas per la Ricerca” for scientific research. The project kicked off in Turin and Florence last month and will be replicated at Rinascente’s other units throughout the rest of the year.

Overall, indie brands were the ones that leveraged the Beauty Week to drop new fragrance and cosmetics, as seen with skin care label Bakel introducing its new patches made of micro stripes of pure hyaluronic acid.

Akro, the niche brand renowned master perfumer Olivier Cresp launched in 2018 with his daughter Anaïs and Jack Miskelly, unveiled its seventh scent Ink. Evoking the atmosphere in a tattoo studio, the fragrance adds to Akro’s overall concept of celebrating different addictions, ranging from smoking to chocolate.

Founded by Daniela Maffoni last year, skin care start-up yoUBe Cosmetics also seized the moment to expand its anti-age line launching a summer-edition kit comprising a face serum and body milk. It was the chance to catalyze the attention around the brand as Maffoni is gearing up to expand distribution, flanking the online channel with presence in pharmacies in Italy, as well as entering the French and Middle Eastern market in the second half of the year.