The costume designer is a theatrical artist who brings stories to life in the presentation of character. Through research, collaboration, and text interpretation with the director and fellow designers, the costume designer creates a symbiotic relationship with the actor. This visual response is sometimes subtle and sometimes bold, depending on the needs of the theatrical moment, but it always has a silent power. The actors’ bodies inhabit the synthesis of all these choices.

Leading with empathy as costume designers, we explore the characters of the narrative text through contextual factors such as cultural identity, economic structures, family dynamics, and gender presentation. The design’s strength is not only determined by our questions, the depth of our research, and our visual artistry, but who we are as human beings.

When live theatre shut down last year, this process stopped. As theatre artists, we had the resource of time to examine our past work, asking how this process intersected with this historical moment. The pause provided a unique opportunity to reflect on this question and address what informs our sculptural aesthetic.

By examining these prompts in the first quarter, students had the opportunity to investigate the early influences on their aesthetics and probe their voices as they grew as artists. We then asked our students to create a sculptural expression that told a deeply personal story. The culmination of this exploration was then synthesized into one design and fabricated in the second quarter by the gifted costume, scenic, and lighting artisans at the Virginia Wadsworth Wirtz Center for the Performing Arts. Each piece, with its individuality, became universal. Alaina Moore (she/her) is a Chicago-based multidisciplinary artist. She is an
ardent believer in the transformational power of beauty beyond traditional valuations,
binaries, and judgements. In her work and in her life, she is dedicated to exploring
ways we can heal our relationships to the material world within the consumer capitalist
framework of modern American society, and in doing so enrich our connections with
one another.

b : the hardened outer protective layer of a pupa

also : a sheltered state or stage of being or growth Lia Wallfish (she/her) is a Jewish Israeli costume designer and painter. Born in Israel, Lia moved to the United States at the age of 22 after completing her military service in Israel. She earned her B.A. in theatre at the University of California, Los Angeles. In her art, Lia hopes to challenge the conventions she experienced growing up in Israel and is devoted to telling stories that inspire inclusion and healing.

“Wrapped Up is an artistic perspective on the religious repression of women within the Jewish faith,” said Wallfish. “The straps that wrap the sculpture are emblematic of the Jewish tefillin, which are worn by observant Jewish men during prayer. The tefillin are primarily reserved for men’s religious practices, and many sects within the Jewish faith prohibit women from using them. In this piece, the straps wrap the female figure in a restrictive way, confining her in place while simultaneously highlighting her feminine qualities. Feminine struggle within the Jewish faith is an ongoing narrative within Israeli society, in which ancient religious traditions continue to clash with the feminist movement. Several of the straps are embedded with a revised text of the traditional Jewish prayer recited by Jewish men: ‘Thank you, God, for not making me a woman.’ The prayer is revised to read, ‘Thank you, God, for making me a woman,’ evoking the feminist sentiments of modern Israelis and reclaiming the religious freedom of Jewish women.” Ben Argenta Kress (he/him) is an artist primarily interested in who we are and who
we can be, together and alone. Informed by his interest in psychology and sociology,
these musings have been central to Kress’s work as a costume designer, visual artist, and
manager. Recently returned to the Midwest (his place of birth), Kress previously found an
artistic and professional home in Baltimore.

“As I rejoin the scholastic world, I’ve been reflecting on my previous experiences in art education,” said Kress. “Specifically, I’ve been ruminating on the power dynamic between student and mentor, both where that has led to growth and where that power has been abused. This piece, which is truly a collaboration between artist, artisan, and mentor, expresses that dichotomy: the inherent optimism of creation through collaboration and the vulnerability of the individual artist through the process of finding their voice. It is a celebration of the power and potential of the creative process itself as well as a reflection of what that process can leave behind.” Kotryna Hilko (she/her) is a Mexican Lithuanian American costume designer based in Chicago. With a background in acting, her interest lies in the power of storytelling. Her hope is to uplift the stories and experiences of those whose voices are not traditionally celebrated.

“The monarch butterfly has always been important to my family, standing as a symbol of our family’s origin as immigrants and our Mexican heritage,” said Hilko. “But beyond that, I’ve always been fascinated with the metamorphosis and migration of the monarch. They are a symbol of life and death and the journey we must take along the way.

“As I reflected on my graduate school experience and what this year has meant to me, the thing I’m most grateful for is the ability, time, and space to grow, evolve, and learn. This piece is a symbol of my evolution as an artist since coming to Northwestern. It is about taking raw materials and learning to manipulate them, transforming them into beauty and meaning. I hope it can be a celebration of life and the influences—past, present, and future—that have made me who I am.” 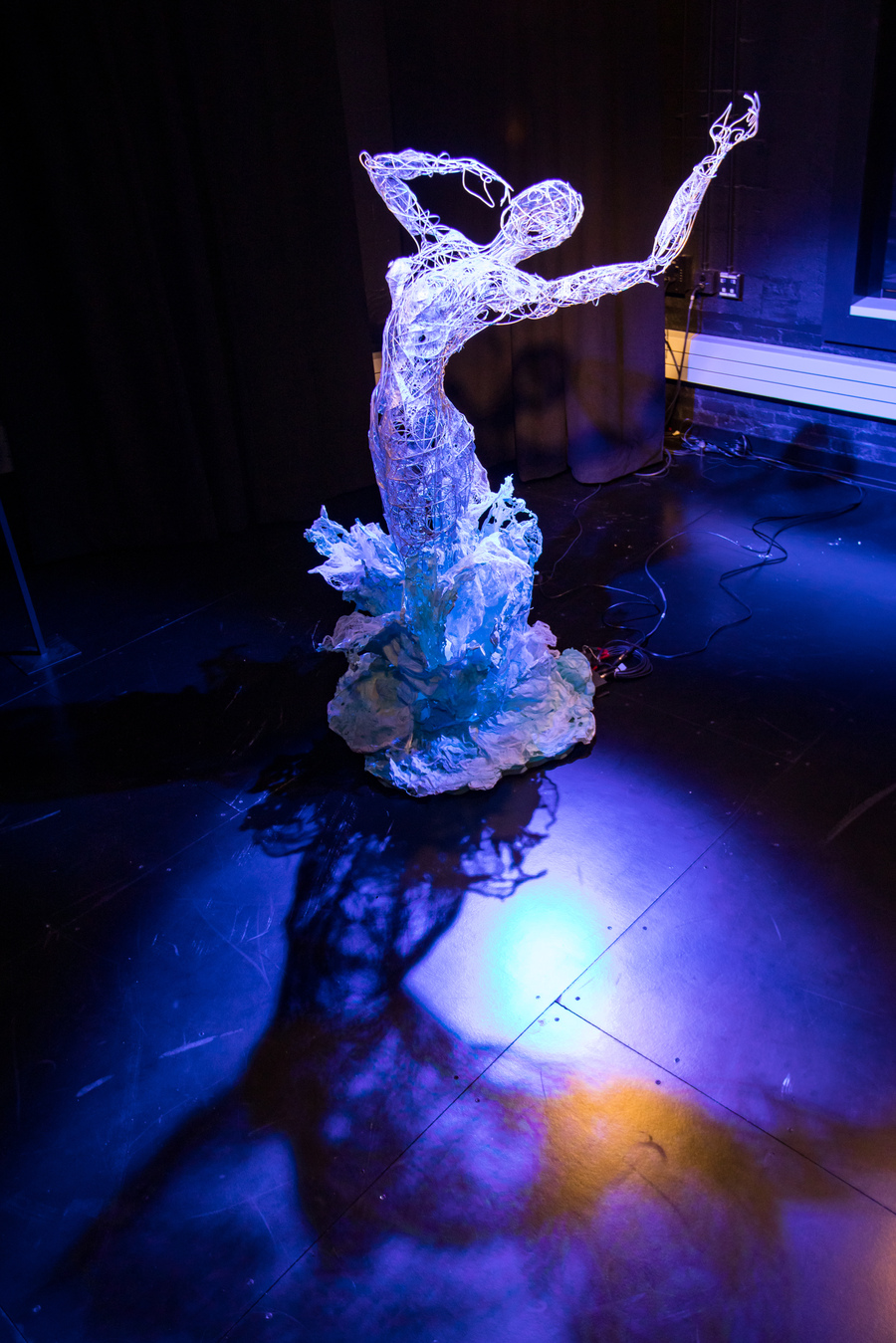 “In celebration of bravery through loss and grief, I have decided to draw my map,” said Postman. “It is my dream. It is my fear: The Unknown. Calm and wild all at once. ‘Draw a map, believe in foreseeable ends.’ I wrote that to myself one time when I felt lost. I am not lost like that anymore, just hesitant. It’s safe to stay put; it’s brave to move forward.” David Arevalo (he/him) is a Texas-born, Chicago-based Mexican costume designer, maker, and artist. He is compelled to help tell stories that focus on the lives, experiences, and histories of communities that have found themselves underserved and underrepresented within the American artistic canon. The transformation and elevation of ideas, objects, and expectations is central to his practice.

Inspired by early 20th century Mexican philosopher José Vasconcelos’ prediction and promise for the sublime future of Latinos in the Americas, Raza Cósmica explores the collision, expansion, and equilibrium that coexist in mestizo bodies and spirits in the aftermath of colonization. Blending historical Central American narratives and folklore, contemporary perspectives of border and transborder ideologies, and the infinite physical and spiritual possibilities accessible through Latino Futurism, Raza Cósmica showcases the power, energy, and self-determinism that can be found when colonized communities harness and emerge from generational traumas.

Said Arevalo, “Everything around us has the right to be included as part of our culture’s artistic legacy—from tamale making to masonry, from adobe to oil paint.”

Linda Roethke (she/her) is a professional costume designer, member of USAA, a studio artist, and a professor of costume design at Northwestern University. Her teaching centers on costume design, freehand drawing, and fabric modification.

Support American Theatre: a just and thriving theatre ecology begins with information for all. Please join us in this mission by making a donation to our publisher, Theatre Communications Group. When you support American Theatre magazine and TCG, you support a long legacy of quality nonprofit arts journalism. Click here to make your fully tax-deductible donation today!