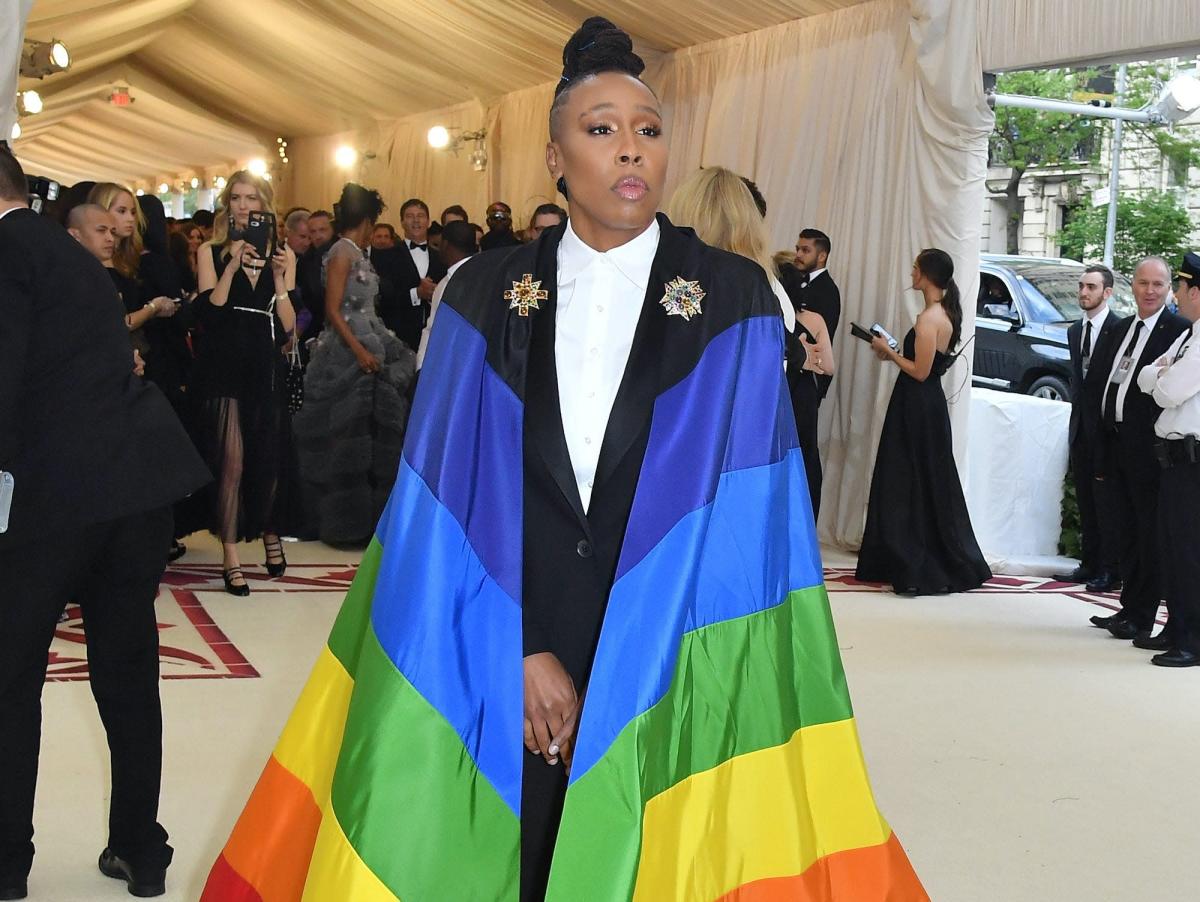 Madonna called her daring Givenchy look at the 2016 Met Gala “a political statement as well as a fashion statement” for women’s rights.

“The fact that people actually believe a woman is not allowed to express her sexuality and be adventurous past a certain age is proof that we still live in an ageist and sexist society,” Madonna wrote in an Instagram post a few days after the Met Gala. “I have never thought in a limited way and I’m not going to start. We cannot effect change unless we are willing to take risks by being fearless and by taking the road less traveled by. That’s how we change history. If you have a problem with the way I dress it is simply a reflection of your prejudice.”

In an interview with Vogue in May 2018, Waithe explained that she wanted to show support for the LGBTQ+ community as the Catholic church continues to have a fraught relationship with homosexuality.

“Tonight, this cape is not imaginary, it’s rainbow-colored,” she told Vogue of her Wes Gordon design. “And we got the black and brown [stripes], you know. I’m reppin’ my community, and I want everybody to know that you can be whoever you are and be completely proud.”

Waithe’s periwinkle suit featured several tributes to the LGBTQ+ community, Jean-Raymond told The Cut. The pinstripes were made of lyrics from the songs “I’m Coming Out,” “You Make Me Feel,” “We Are Family,” “Supermodel,” “Don’t Leave Me This Way,” “I Will Survive,” and “Take Me or Leave Me,” and the buttons featured the faces of queer icons like Grace Jones and RuPaul. The back of her suit read “Black Drag Queens Invented Camp,” in a reference to the 2019 gala theme of “Celebrating Camp: Notes on Fashion.”

“We collaborated on really bringing a message,” Waithe told E! News in May 2019. “To me, I really wanted to make sure my outfit represented the Black drag queens who started this camp thing about being over the top and all that jazz.”

At the 2019 gala, Rep. Carolyn B. Maloney wore a neon-yellow Vassilis Zoulias dress with a firefighter jacket she vowed to wear until the passage of her bill for 9/11 first responders.

“Anytime anyone sees me wearing the coat, I can feel it tugging on their conscience, and I can feel their remembering,” Maloney, who represents New York’s 12th congressional district, told People magazine in 2019. “And many people then have to tell me where they were on 9/11. This jacket speaks louder and more eloquently than any speech that can be given on the floor.”

The Never Forget the Heroes Act became law in July 2019.

In 2021, Maloney wore a dress made of “equal rights for women” pennants.

The multicolored dress was covered with a cape made of individual pennants that said “equal rights for women” on them. Maloney also carried a purse that said “ERA YES,” voicing support for the ratification of the Equal Rights Amendment.

In her first Met Gala appearance in 2021, Rep. Alexandria Ocasio-Cortez wore a dress with “tax the rich” written on it.

The white Brother Vellies dress was strapless and had a tulle mermaid skirt.

“Tax the rich” was written on the back in large red type.

“The medium is the message,” Ocasio-Cortez wrote on Instagram. “Proud to work with @aurorajames as a sustainably focused, Black woman immigrant designer who went from starting her dream @brothervellies at a flea market in Brooklyn to winning the @cfda against all odds — and then work together to kick open the doors at the Met.”

De Jager, a beauty guru with over 13 million subscribers, came out as a transgender woman in an emotional video in 2020.

The custom outfit looked like it had a globe on the bodice at first glance, but the map formed the shape of two men kissing, which was an image adapted from Wojnarowicz’s work. Levy told Vanity Fair that he intended for the hand-embroidered, hand-beaded outfit to celebrate “queer love and queer visibility.”

“I think that has always kind of been what the Met has embodied — doing what you can do to send a message,” Levy said. “It’s not just clothes, you’re celebrating the impact that fashion can have and culture.”

Oversized sleeves, pants embroidered with a map, and black boots covered in gold embellishments and flowers completed the look.

Also in 2021, Megan Rapinoe carried a clutch emblazoned with the message “In Gay We Trust.”

Cara Delevingne made a statement 2021 in a custom Maria Grazia for Dior look.

The custom outfit was a symbol of women’s empowerment and sends a message to “stick it to the man,” Delevingne told Keke Palmer on Vogue’s livestream of the red carpet.

Sexual-pleasure coach Luna Matatas, who trademarked “Peg The Patriarchy” in 2018 as a metaphor for subverting the patriarchal system, said she wasn’t credited as the owner by Delevingne or Dior.

The pink, one-shoulder dress had a dramatic cutout on the center of the bodice that exposed most of her torso. She said the gown had 10 million crystals on it.

The theme of the 2021 event was “In America: A Lexicon of Fashion.”

“Both the flags draping are the Black American heritage flag and the Filipino flag, because I’m Black and Filipino and that’s what makes me an American girl,” she told E! News on the red carpet.

Billie Eilish only agreed to wear an Oscar de la Renta gown in 2021 after they agreed to stop making any clothing with fur.

Eilish’s peach, off-the-shoulder ball gown had a dramatic train that required five people to carry it in. She paired the dress with Cartier jewelry.

Eilish, who’s been vegan for seven years, told The New York Times’ Jessica Testa that she was “honored to have been a catalyst” at the fashion house, adding that she was shocked that “wearing fur isn’t completely outlawed at this point in 2021.”

Read the original article on Insider